Is a minute of pain worth a lifetime of glory? ‘Unbroken’ tells the remarkable true story of Louis Zamperini, a U.S. Olympic athlete and World War II bombardier who survived a plane crash, 47 days adrift at sea and being a prisoner-of-war.

The atrocities of war are ugly, but the resiliency of the human spirit to survive against all odds is nothing short of beautiful. Based upon the remarkable true story of Louis Zamperini, Universal Pictures’ Unbroken has taught me these life truths. If you ask me, it couldn’t have come at a better time than Christmas, a time of the year when we’re supposed to care about the plight of our fellow man – even if that plight and suffering occurred some 70 years ago.

Directed by Angelina Jolie, Unbroken is based upon the 2010 bestseller Unbroken: A World War II Story of Survival, Resilience, and Redemption, which was written by Laura Hillenbrand (who also penned the bestseller about Seabiscuit). Although Louis Zamperini died this past summer at the ripe old age of 97, his spirit lives on – reaching an almost legendary status – thanks to the book and film about his life.

The film begins up in the puffy, white clouds over the vast Pacific Ocean, where we’re first introduced to Louis: a young, charismatic World War II bombardier (portrayed by Jack O’Connell). One of the strongest attributes about Unbroken that I observed from its beginning is its convincing realism. It’s as if you’re actually right there in the cockpit with Louis and crew, part of the dizzying action of the war, wondering if (or when) this rickety plane is going to finally be submerged into the watery depths waiting below. In fact, the effects were so good at the beginning that if this film had been shown in 3D, I’ve no doubts I might have thrown up in my theater seat.

Enlisting in the war was what most able-bodied, patriotic young men of the 1940s did, and Louis was no exception.

While Louis’ fate in the plane hangs precariously in the balance, we’re given flashbacks from his youth, which are designed to give you insights about his character and the likely causes for his unbroken spirit in the film’s latter half. The son of Italian immigrants, it seems Louis led a troubled youth full of thievery, underage drinking and fighting because he was constantly being bullied due to his immigrant status. However, his older brother Pete was always looking out for him. After observing how fast he is able to run away from the bullies, it’s Pete who encourages him to try out for the school’s track team. A natural athlete, Louis sets all kinds of records for running and is deemed good enough to represent the United States in the 1936 Olympic Games in Berlin. He was slated to return to the 1940 Olympics in Tokyo, but of course, World War II cancelled those and caused Louis’ life to take a different direction. Enlisting in the war was what most able-bodied, patriotic young men of the 1940s did, and Louis was no exception.

This brings us back to the surmounting action on the plane. After Louis’ plane goes down in the Pacific, he spends 47 days in a raft in shark-infested waters, only to be rescued by the Japanese. Considered an enemy of Japan, Louis is sent to a prisoner-of-war camp. It’s hard to say which is a worse fate: the days spent starving, dehydrated, sunburned and almost stark-raving mad while drifting aimlessly about on the tiny raft with two of his fellow survivors (Domhnall Gleeson and  Finn Wittrock) or the days spent freezing, malnourished and beaten – either for information about the Allies or just for the seeming sheer fun of it – while he’s a prisoner in the camp. One thing I didn’t enjoy was the seemingly endless torture/beatings. It felt like Louis was never going to get a break.

Because of his “celebrity status” as a former Olympic athlete, Louis is quickly singled out by the camp’s ruthless leader, Mutsushiro “The Bird” Watanabe (portrayed by musician Miyavi), to endure additional hardships on his cruel whims. It seems “The Bird” is angry because he comes from a life of privilege and he feels it is beneath him to be the commander of a lowly prison camp (he wants to be promoted). I’d never heard of the musician Miyavi, but he gives an amazing performance as the film’s villain. You will truly grow to hate him by the climax. I didn’t read the book, but I overheard some women discussing it after the film ended. While they enjoyed the film, they felt that the character of “The Bird” didn’t come across as clearly from the book to the film adaptation. It seems they were left wanting more. If that’s the case, perhaps I’ll be reading the book next year.

“The Bird” is oddly fascinated by – and begrudgingly respectful of – the resiliency of Louis’ spirit.

My personal take on “The Bird” is that he is oddly fascinated by – and begrudgingly respectful of – the resiliency of Louis’ spirit. He attempts to break him because I think he perceives that Japan is losing the war and Louis has become a sort of twisted symbol of his hatred for the Allies at-large. In a weird way, I think “The Bird” almost feels like the two of them are equals or friends, and perhaps he secretly wishes he possessed more of Louis’ inner strengths. While he gets frustrated that he cannot break him, I think inwardly he respects that. If he were to break him, I think it would expose fragilities about himself and the rest of mankind that he is not willing to face.

While undergoing the routine tortures of “The Bird” and his men, Louis becomes almost a mascot to his fellow prisoners. As long as he remains strong of character in the unrelenting face of adversity, it gives them a flicker of hope. His mantra, “If I can take it, I can make it,” resonates true for all of the prisoners in the camp. While it’s not really fair to expect one individual to be that brave, it’s a fact of life that sometimes we all need a hero to cling to so that we do not give up and lose all hope in the darkest of times. Louis is remembered as a hero to many in his generation, and his inspirational story has introduced him to millions of people in a new one. Perhaps “A minute of pain is worth a lifetime of glory.” However, I can’t say that with any unwavering certainty.

What I found most remarkable about this film is the fact that it hadn’t already been made. I read on IMDb that Universal secured the rights to Louis’ story for a film all the way back in 1957, when they were eyeing Tony Curtis to possibly portray him. Imagine what that film would have been like!

Unbroken is probably the best film I watched in a theater in 2014.

Unbroken is probably the best film I watched in a theater in 2014 (although at times it can be cringe-worthy). I’m sure it’s not perfect, and if you read the book, you might not feel it deserves quite as much praise. But I think it’s beautiful to watch for the scenery and the overall message about not giving up, and the musical score is equally alluring. What I found most interesting about Louis is the fact that he was able to eventually forgive his captors and go back to Japan to be a torch-bearer in a later Olympics ceremony. I’m sad knowing he passed away this year before the film came out. It would have been nice to have seen him at the premiere being celebrated for being such an extraordinary human being.

Editor’s note: Zamperini was able to see the film privately before he died. He and Jolie became very close friends and she downloaded a copy of the film to her laptop and drove to the hospital to watch with him. 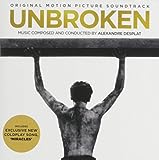