Bacon: Soon to be a staple of the past? There’s a pending porkacolypse, folks, and it’s coming to local grocers, butcher shops and carnicerias sooner than you think. The world will soon be going to hell in a hand basket. It appears we’ll be losing one of our four food groups: Bacon.

Where will the maple long johns at donut shop get their porky topping? (Voodoo Donuts could very well go out of business.) Where will the county fairs get the filling for their chocolate covered bacon? What would crack potatoes be without bacon crumbles? *sniff*

We need a plan … and now. We need to stock up. We need to ration. We need careful consideration and preparation lest our beloved bacon becomes but a distant memory.

Think about it: Breakfasts won’t be the same! Your over-medium eggs will be lonely! Waffles? Sadly lacking! The BLT? Extinct! Those ever-lovin’ strips that make your burger: No more! Rumaki will be a thing of the past! Those tiny, delicate squares of love in your salad and atop your potato skins? History! We all know bacon is what “makes” the creamed spinach … right? Well … no longer!

“No more bacon.” Those are words that are chilling right down to the very core. *shudder* 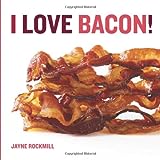 5 Comments on “Bacon: Soon to be a staple of the past?”