You know … Christmas is but a few short months away. And I wouldn’t fault you if you found one or more of the items below on your stocking stuffer list. (To each his or her own.) But one of’em … one of ‘em is a must-have.

When I first viewed the piece “Inventions For Lazy People” I was alternately aghast and amused.

… the banana slicer and brownie contraptions are just plain dumb.

Certainly, there are a few things on the list which might just make you shake your head in wonder. Pre-wrapped potatoes? As someone who almost always eats the skin of his tubers, I’m suspect right from the get-go about the cleanliness of said skins. A chocolate stirrer built right into the mug? Sounds to me like additional clean up work would offset any benefit you’d get from it. And the banana slicer and brownie contraptions are just plain dumb. It just so happens I’ve had experience with the latter — out of curiosity — and here’s the deal (because there’s usually “a deal”): Getting that thing ready for use is not only a bear, but making certain there are no errant crumbs or other hangers-on during the washing of it is a literal pain in the ass. I figure the banana slicer offers a similar, unneeded chore after its use.

And come on: You knew sooner or later an all-in-one shampoo/conditioner/body wash was in the cards long, long ago. (Helpful Suggestion: Toss a depilatory in the mix and you might really have something there.)

The truly dumb contraptions, however, are the twirling spaghetti fork and the motorized ice cream cone. My take is that if you’re really on a mission to eat either of these two items and you need one or the other of these “space age inventions” to aid in your efforts, you are indeed lazy.

But that’s not the reason I’m here, to sneer at folks too uppity to peel their own eggs or who find making smores too tedious.

I’m here to talk about an institution, people. I’m here to angrily call out the creator of the “Inventions For Lazy People” list who so wantonly pooh-pooh’d a vaunted product we all know and love … whether we actually own one, have given one or made comment to friends and family we could use one.

I’m talking about a product that was a verifiable hit when it first came on the market in the mid-1980s. That’s right: I’m talkin’ about The Clapper.

When was the last time you fumbled around in a dark room, tripping over furniture looking for the light switch? With The Clapper you’ll never find yourself in these annoying situations again.

Let me tell you something: Your folks wanted one of these when it first came out. Your cousin Jeb wanted one. The neighbors down the street and Uncle Milty the grocer across town all wanted a Clapper when it first hit the stores. You weren’t keeping up with The Joneses if you didn’t have The Clapper in your home or apartment or double-wide trailer. Little known fact: There was mayhem and chaos in the streets in September of 1986 from all the people rushing hither and yon to get to their local Thrifty Drug Stores to acquire one.

Suddenly, it wasn’t a problem if you forgot to turn your light off after you’d gone to bed. Because, with The Clapper, there was immeasurable convenience at the clap of your hand! “With patented sound-activated technology The Clapper allows you to turn on and off your lights / TV/ radio and many other household appliances with a simple clap of your hand.” Genius!

Oh, sure … we have automated movement-sensing doodads that will do the trick nowadays … but what do you think was the grandfather of them all? That’s right! The Clapper!

Sliced bread might be the bee’s knees, but The Clapper is accommodation personified! Wanted! Needed! Immortalized in song! It’s been secured in pop culture and the history of television and film everywhere by the likes of Mary-Kate and Ashley Olsen, The Simpsons, Austin Powers … and even God Himself!

The Clapper is beyond reproach!

Yes, I know: The jingle in the commercial could have been recorded with the final “The Clapper” (monotonously titulated by that man and woman duo) with a little more enthusiasm. And the voice over in the commercial could have been done as if the guy wasn’t itching to be anywhere else when he reported the benefits of The Clapper. But hey … then can’t all be gems. Besides … that tune is a mainstay that makes our nation proud.

The Clapper: Developed, created, manufactured, marketed and sold in the good ‘ole U.S. of A. You think they issue United States patents to any old invention? Hell no! Only the finest, people … only the finest!

The writers/editors who put that “Inventions For Lazy People” list together ought to be ashamed of themselves for including The Clapper among the other detritus. I have serious doubt they’re even flag-waving red, white and blue Americans. 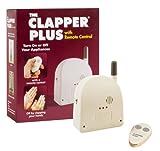 One Comment on “The Clapper isn’t lazy, it’s an institution”